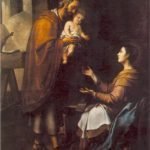 “Who is not struck with beholding your lively faith; your piety full of sweetness and modesty; your generous hospitality; the holiness which reigns within your families; the serenity and innocence of your conversation?” St. Clement, Pope and Martyr, First Epistle to the Corinthians. “All the institutions and ordinances which God has created in civil society … Continue 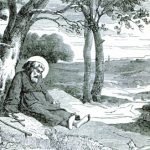 St. Benedict of Anian was the son of Aigulf, Governor of Languedoc, and was born about 750. In his early youth he served as cupbearer to King Pepin and his son Charlemagne, enjoying under them great honors and possessions. Grace entered his soul at the age of twenty.  He resolved to seek the kingdom of … Continue 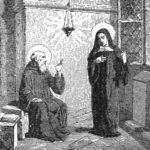 Of St. Scholastica but little is known on earth, save that she was the sister of the great patriarch St. Benedict, and that, under his direction, she founded and governed a numerous community near Monte Casino. St. Gregory sums up her life by saying that she devoted herself to God from her childhood, and that … Continue 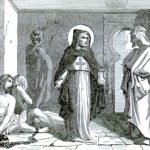 The life of St. John of Matha was one long course of self-sacrifice for the glory of God and the good of his neighbor. As a child, his chief delight was serving the poor; and he often told them he had come into the world for no other end but to wash their feet. He … Continue 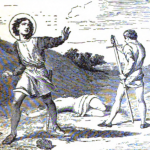 In 976, Sergius, a nobleman of Ravenna, quarrelled with a relative about an estate, and slew him in a duel. His son Romuald, horrified at his father’s crime, entered the Benedictine monastery at Classe, to do a forty days’ penance for him. This penance ended in his own vocation to religion. After three years at … Continue 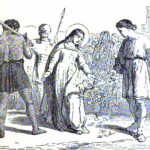 St. Dorothy was a young virgin, celebrated at Cæsarea, where she lived , for her angelic virtue. Her parents seem to have been martyred before her in the Diocletian persecution, and when the Governor Sapricius came to Cæsarea he called her before him, and sent this child of martyrs to the home where they were … Continue

St. Agatha was born in Sicily, of rich and noble parents— a child of benediction from the first, for she was promised to her parents before her birth, and consecrated from her earliest infancy to God. In the midst of dangers and temptations she served Christ in purity of body and soul, and she died … Continue 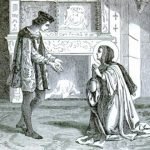 Born of the blood royal of France, herself a queen, Jane of Valois led a life remarkable for its humiliations even in the annals of the Saints. Her father, Louis XL, who had hoped for a son to succeed him, banished Jane from his palace, and, it is said, even attempted her life. At the … Continue 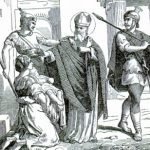 St. Blase devoted the earlier years of his life to the study of philosophy, and afterwards became a physician. In the practice of his profession he saw so much of the miseries of life and the hollowness of worldly pleasures, that he resolved to spend the rest of his days in the service of God, … Continue 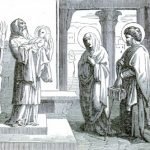 The law of God, given by Moses to the Jews, ordained that a woman, after child-birth, should continue for a certain time in a state which that law calls unclean, during which she was not to appear in public, nor presume to touch any thing consecrated to God. This term was of forty days upon … Continue