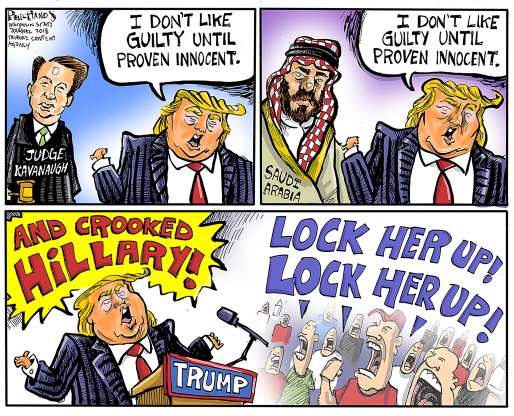 For Republicans, there are many positives heading into the mid-terms, but the biggest obstacle to Republican progress is the self-contradiction that arises during the party’s emotional moments, when it forgets that the cameras are rolling and shows signs that its motives aren’t pure.

The illustrator Phil Hands captures this problem well in his recent cartoon (right).

Americans are currently bored by their material prosperity because they have no transcendent mission to pursue.  This is, of course, owed to their abandonment of the Gospel, which sets the limits on our disagreements and reminds us that we will never be happy in this “valley of tears”.

For most Christians, it seems that the Republicans are nearer to Christianity than the Democrats, and I’d agree with that, but that often becomes an excuse to abandon truth and wander into careless self-contradictions.

The whole aim of Socrates’ famous investigations was to lead one who disagrees with the truth into self-contradiction.  In philosophy, it is impossible to answer many important questions because they are beyond the reach of human reason and experience, and depend on divine revelation.  The power of philosophy is not as often the establishment of truth, but the discovery of falsehood.  Socrates was able to prove the opinions of the ancient Greeks to be false, by forcing them to reason them out further than they were accustomed to do.  If only men would follow their opinions a few steps further, they would soon see that they cannot be true.  That was Socrates’ mission.

However, if Socrates were working the scene in American politics, Democrats wouldn’t be the only ones in trouble.  Republicans are saying and doing many things that they really have no need to say or do.  No matter how confident we are that we are right on a subject, we must be careful to avoid turning to lazy arguments.  We may be right, but our opponents see that we’re vulnerable because we don’t have the answers yet.  That’s why we resort to self-contradictions.

Every time Republicans make progress, they let the Democrats go by some foolish gaffe.  I’m not a subscriber to any party, but as I said before, I have to acknowledge that the Republican party’s platform is closer to what I’d consider a “Christian” political platform.  Until Republicans learns to be patient and do the work that’s needed to persuade people truly, these self-contradictions will keep Democrats supplied with the ammunition they need to fight complete failure in coming elections.