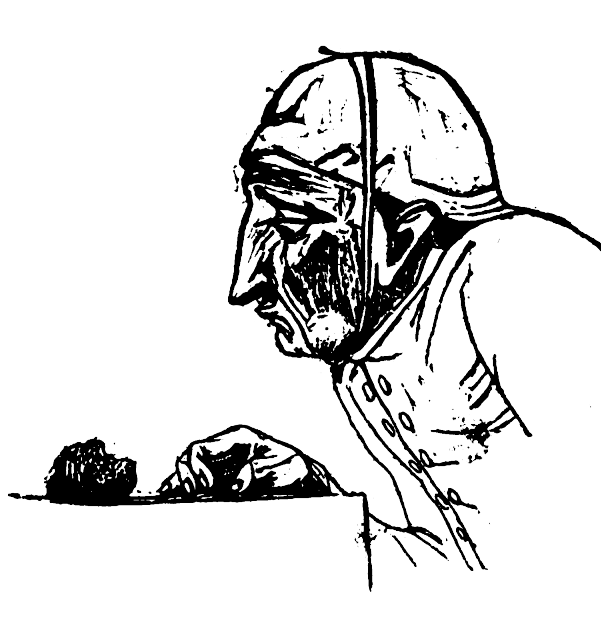 Parsimony is an excessive and unreasonable sparing of expense.

The parsimonious man calls at the house of his debtor to demand a halfpenny of interest, left over in the last month’s payment. At a banquet he carefully notes how many cups of wine are drank by each guest; and of all the offerings to Diana, usual on such occasions, his will be the least. If the smallest article is purchased for his use, however low may be the price, he will say it is too dear. When a servant breaks a pot or a pan, he deducts the value of it from his daily allowance; or if his wife chances to lose a brass button or a farthing, he causes tables, chairs, beds, boxes, to be moved, and the wardrobe to be hunted over in search of it. Whoever would deal with him must be content to lose by the transaction. He suffers no one to taste a fig from his garden; nor even to pass through his fields; no, nor to gather a fallen date or olive from the ground. He inspects the boundaries of his farm every day, to assure himself that the hedges and the fences remain in their places. He demands interest on interest, if payment is delayed a day beyond the appointed time. If he gives a public dinner to his ward, he carves out a scanty portion for each, and himself places his allowance before every guest. He goes to market, and often returns without having purchased an article. He strictly charges his wife to lend nothing to her neighbors; no, not even a little salt, nor a wick for a lamp, nor a bit of cummin, nor a sprig of marjoram, nor a barley cake, nor a fillet for the victim, nor a wafer for the altar: for, saith he, these little matters put together make a great sum in the year. In a word, you may see the coffers of such a fellow covered with mould; and himself, with a bunch of rusty keys at his girdle, clad in a scanty garb, sparingly anointed, shorn to the scalp, and slipshod at noon: and you may find him in the fuller’s shop, whom he is charging not to spare earth in cleaning his cloak, that it may not so soon require dressing again.