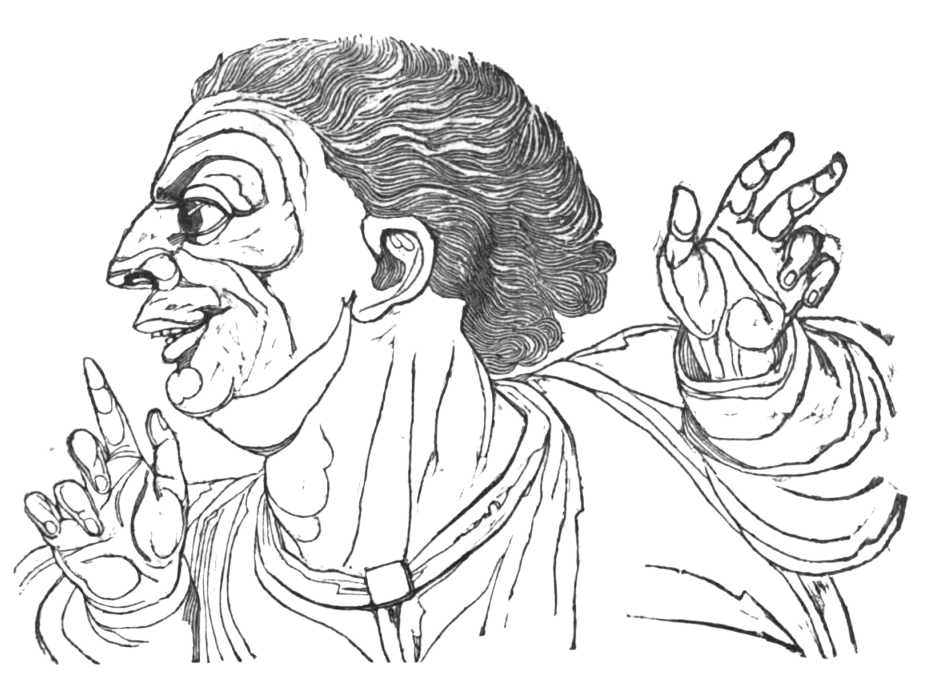 It is to gratify his love of the marvellous that this man spends his life in the invention and propagation of falsehoods.

The newsmonger, meeting an acquaintance, puts on a grimace to suit the occasion, and grinning, asked, Whence come you? what say you? have you any fresh news of this affair? Going on with these questions, he adds; What no later intelligence abroad? Truly the current report is surprising! without allowing a reply, he proceeds, What do you say to it? Is it possible that you have not yet heard of it? Then I fancy I have a feast of news for you. Whereon he never fails to have as his author some nobody knows who; a soldier, or a piper’s boy, or a sutler, just returned from the field of battle, from whom he has heard the whole story: thus he takes care that his authorities are such as no one can lay hold of. He then says that these persons affirm that Polysper chon and the king have gained a complete victory; and furthermore, that Cassander is taken alive. If any asks, And do you really believe this?, he replies, The rumor is already noise through the town; and it gains credit every hour: besides, all accounts agree as to the fact of the battle, and that there has been a vast slaughter. But if there could be any doubt, you have only need to look in the faces of men in power, and you may read the news in their altered looks: and, to tell you a secret, it is whispered that some one from Macedonia, who was an eyewitness of the fight, has been now five days concealed in the office of state. When he has thus finished his tale, as he thinks, very plausible, he puts on a pathetic air Unhappy Cassan der luckless man behold the caprices of fortune! Yet truly he was a mighty captain But remember now, he adds, I have told you this in confidence; keep it to yourself. But this whispered secret is what he has already been telling in all parts of the town. I have always been at a loss to find a sufficient motive for the conduct of men of this sort. They not only lie, but they lie most unprofitably to themselves. How often, for example, while gathering hearers about them in the bath, do they lose their clothes; how often, while in the portico they are gaining victories by sea and land, do they incur fines by neglecting their affairs in court; how often, after valiantly taking cities with their tongues, do they go home supperless Truly theirs seems to me a most wearisome mode of life, passing entire days, as they do, in running from shop to shop; from the portico to the forum; with no other business than to promulgate idle tales, by which to afflict the ears of all they meet.