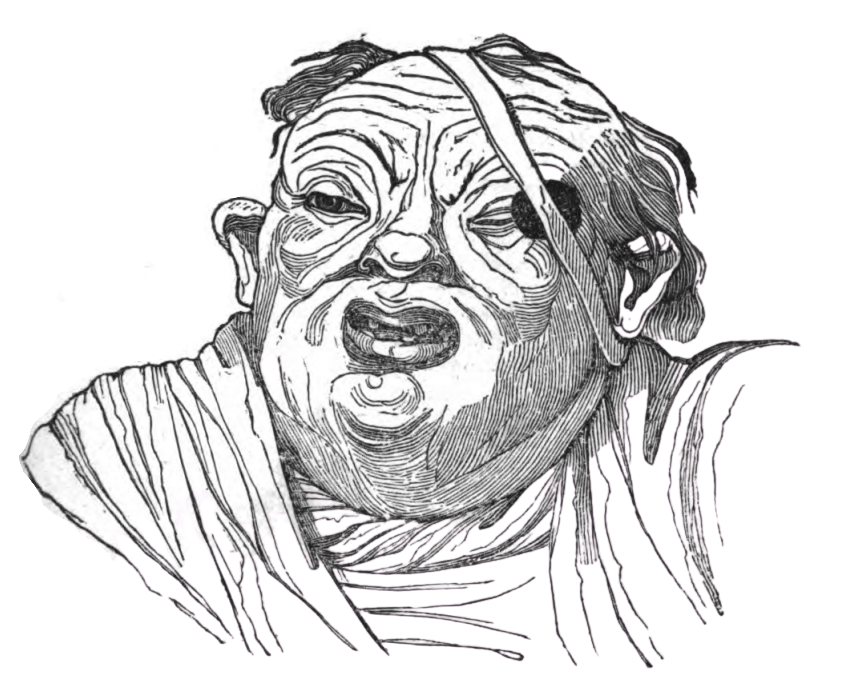 The Ruffian is distinguished by the recklessness with which he perpetrates or witnesses atrocities.

A man of this sort takes his oath without a moment’s reflection; he hears the foulest obloquies without offence; and he is insensible to reproach. His habits of life are those of a vagabond; his manners are obscene; and he is apt for every mischief He is not ashamed, even while sober, to exhibit himself in the lascivious dance, or to play a part in comedy unmasked. He will undertake the office of collecting the money at a show; and will wrangle with those who produce tickets for the spectacle, He keeps open house for company of all sorts; he maintains courtesans; and he will farm the taxes: in trut6h, there is not an occupation by which he will think himself disgraced: he will be town crier, or cook at a tavern; and while he squanders his money in gambling, he refuses to maintain his mother: he is committed to prison for theft; and spends more of his time in jail than at home. It is some fellow of this sort whom you may see gathering a crowd about him in the highway, challenging the mob in a hoarse and brawling voice; while he vociferation angry and contumelious ravings: meantime some are joining the circle, while others leave it before they have learned what he has to say; and no one knows what he means; for some have heard only the beginning, some the fiddle, and some scarce a syllable of his harangue. It is especially on days of public business, when crowds are easily collected, that he delights to make the full display of his mad insolence. He is perpetually either plaintiff or defendant in a lawsuit; and he is ever prepared to carry his point where perjury or audacity can avail him. Litigation is his element; and he is to be seen carrying a casket stuffed with depositions in his bosom, and a file of indictments under his arm. He never declines the honor of being a leader of the rabble; and when he has gained followers he lends them money, exacting the enormous usury of a quarter of the principal, which he collects daily at the stalls and shops of his debtors; and as he gathers his pence he lodges them in his mouth. Men of this sort, whose throats are sewers, flowing with scurrility, and who make taverns and markets resound with their brawling, are the most troublesome of all public nuisances.