There are three tasks for this lesson:

In our last lesson, we learned of the Christianization of Europe by the great Charlemagne and the Frankish kings in the 8th and 9th centuries.  Throughout the last few lessons, we have learned of the Germanic peoples who lived in the northern areas of Europe, who had, for many centuries, been in contact with the Romans.  The Romans constantly fought against these peoples to protect the borders of the Roman Empire.  We read that Julius Caesar described these people as very powerful warriors who got stronger and braver the further one moved north.  In the furthest lands to the north lived the Northmen, or Norsemen.  Today, we refer to these peoples as the “Vikings” but there are some problems with this name and the ideas that surround it.  First, not all Norsemen were Vikings and second, the ideas many have today of vikings have more to do with entertainment than history. 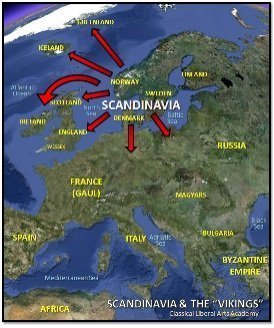 The Norsemen were Germanic peoples, united by a common language and culture.  They filled the lands north of the Roman Empire–into the lands of Scandinavia (click map to enlarge), which is the land north of Europe, across the Baltic Sea.  They were not like the Greeks or Romans, who had the advantage of good philosophy and interaction with God’s people, Israel.  They also didn’t have the rich, warm land that the Greeks and Romans enjoyed on the Mediterranean Sea.  As such, they were a rougher people and forced to do their best with what they could find.   Scandinavia was made up of a number of important people groups–the Norwegians, the Danes, the Jutes, the Geats, the Gutes and the Swedes.  Today, we call their lands Norway, Denmark and Sweden.  These peoples may have been kept outside of the spotlight of ancient and classical history, but they come into the spotlight in medieval history and become very significant peoples for the future.

At the time when Charlemagne was bringing all of western Europe under his control and under the influence of Christianity, the Norsemen began exploring the lands of northern France, England, Scotland and Ireland.  As the map shows, the Vikings sailed the northern seas in all directions, eventually reaching Iceland, Greenland, Spain, North Africa and even Constantinople.  They sailed for three basic reasons:  (1) to raid cities on the sea coasts and along the rivers, (2) to find or take fertile land for new settlements and (3) to trade with other peoples.

The name “Viking” does not refer to a nation or tribe of people.  The word “viking” simply meant  “a sea expedition” in the Old Norse language.  The men who set out on these sea expeditiions were called “vikings”.  Therefore, the vikings were Norsemen who sailed the seas about Europe.  As time went on, the strength of the Norsemen increased and the Europeans decreased.  The tradition in Europe of kingdoms being divided among kings’ sons left kingdoms weakened for the Norsemen. As Charlemagne conquered and Christianized western Europe, the northern Europeans looked south and as they did, the vikings arrived from the north. 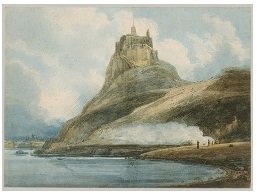 Lindisfarne is a stunningly beautiful, almost mythical, island off the northeast coast of England.  There, in 635 AD, St. Aidan established a monastery which gave the Church a center for evangelism in the north and earned for the island the name “Holy Island”.  There, another great Christian, St. Cuthbert later led the monastery, who performed famous miracles and later became the patron saint of Northumberland, which was the county of England closest to Lindisfarne.

In 793, the Holy Island was shaken by an undeserved attack of pagan Norsemen.  One man wrote:

“The pagans from the northern regions came with a naval force to Britain like stinging hornets and spread on all sides like fearful wolves, robbed, tore and slaughtered not only beasts of burden, sheep and oxen, but even priests and deacons, and companies of monks and nuns. And they came to the church of Lindisfarne, laid everything waste with grievous plundering, trampled the holy places with polluted steps, dug up the altars and seized all the treasures of the holy church. They killed some of the brothers, took some away with them in fetters, many they drove out, naked and loaded with insults, some they drowned in the sea.”

This, then was the Christians’ view of these vikings.  They were savage, sacrilegious murderers who had no respect for God or God’s servants.  The destruction was so shocking that Alcuin, Charlemagne’s counselor, believed that there must have been some secret sin in the place that called for it:

“the pagans desecrated the sanctuaries of God, and poured out the blood of saints around the altar, laid waste the house of our hope, trampled on the bodies of saints in the temple of God, like dung in the street…Either this is the beginning of greater tribulation, or else the sins of the inhabitants have called it upon them. Truly it has not happened by chance, but is a sign that it was well merited by someone. “

Eventually, the monastery had to be abandoned because of the danger of attack from the north, which they had thought was not possible.   This was the beginning of the Viking Age.

In the mid 800s, Norway was composed of a many small kingdoms gained and lost through constant tribal fighting.   Harald rose up as a powerful man in Norway, son of one such king, and yet he desired to bring all of Norway under his power.  There is a romantic story about Harald that may be true and is worth the telling.  It is said that among the first of his conquests was to be the daughter of another king, whom he loved.  Gyda was a Norwegian royal lady who Harald wished to marry.  Gyda, however, rejected his proposal and told Harald that she would be his queen when he was king of all of Norway.  Harald made a vow that day that he would never comb or cut his hair until that was accomplished.  Thus, he was called “Harald Tanglehair” because of his obviously messy head.

More seriously, Harald had the power to accomplish this great task.  He led a force of men who began conquering smaller kingdoms and terrorizing Norway.  The peoples who could not resist him were forced to flee from the land and left on expeditions overseas, looking for a place to safely settle.  By 872, Harald had conquered Norway, took his bride and did his hair.  Thereafter, he was renamed  Harald Fairhair, first king of Norway.

What is significant in this history is the fact that pressures like this pushed the vikings out from Scandinavia and explain part of the reason behind the vikings’ arrival in Europe.

Around 900 AD, the Norsemen came into the Frankish kingdoms ruled by the descendants of Charlemagne.    Because of the weakness of the divided kingdoms of the Franks, the viking invaders had success in taking the lands of northern France.  Rollo, the leader of these vikings, pressed further to the south before he was checked by Charles the Simple, a descendant of Charlemagne.

At that time, he and the leader of the Norsemen, Rollo, made an agreement that made Rollo an ally of King Charles and that made him owner and defender of the lands of northern France.  It also required that Rollo and his northmen accept Christianity.  Rollo accepted the agreement and Charles showed his commitment to Rollo by giving him his daughter in marriage–in addition to the land.  This land and marriage made the two peoples one and turned Rollo and his companions from enemies of France from the north to protectors of it against future enemies from the north. It was quite a conversion and a brilliant move by the Christian king.

These two peoples then mixed and became one, forming a new group from the two, Scandinavian and French culture mixing together.  They were French-speaking, Christian people who represented France and the north.  The people there became known as the “Normans” which is another name that simply means “north men” or “people of the north”.  The land in which they dwelt was called Normandy.

In the 500s AD, England was invaded by three Germanic tribes:  the Angles, the Saxons and the Jutes.  These  groups blended into one, whom we call the “Anglo-Saxons“.  Throughout all of this history, from before Charlemagne through the rise of Normandy in France, England was ruled by the Anglo-Saxons.  Between 600 and 700 the Anglo-Saxons were Christianized by missionaries such as St. Augustine of Canterbury.

Ever since the attack on Lindisfarne, the Anglo-Saxons knew of the danger of the Norsemen.  They maintained their power until 1066 AD, when St. King Edward died.  King Edward, known as “Edward the Confessor”, died without making known who his successor would be.  He had no sons, being a celibate man, and it was said that he promised his throne to William, the Duke of Normandy.   On his deathbed, however, he was said to have appointed King Harold Godwinsonn (an Anglo-Saxon) to take his place.  Following his death, three different peoples sought to control England:

In 1066, the Norwegians attacked and were joined by Tostig Godwinson–Harold’s own brother–and English rebels.  These armies fought at the Battle of Stamford Bridge and Harold Godwinson’s men crushed their foes and defended his crown.

Unfortunately, it was what we call a “Pyrrhic” victory, for it was a victory that cost them too much.

Seeing that the battle was fierce and Harold’s men were weakened, William decided the time was ripe for his own attack.   Three days after Harold’s victory over the Norwegians, William led the Normans into southern England.  The two armies battled for two weeks, with the climax coming at the Battle of Hastings.  There, the Normans defeated the English, leaving William in control of England.

On Christmas Day, 1066, William “the Conqueror” was crowned king by the Archbishop of Canterbury at Westminster Abbey.

With the Norman Conquest at the Battle of Hastings in 1066, the Viking Age came to an end.  From the first raid on Lindisfarne to the fall of the Anglo-Saxons the Norsemen made their mark on history and changed the culture of Europe forever.  In our next few lessons, we will return to central and southern Europe to learn of the developments in the Church there, but we will come back to pick up here with Norman England.