Home » Classical Catholic Library » What is the Catholic Homeschool Curriculum? » VIII. The Arts in the Higher Middle Ages

The period from the founding of the Christian Church through the 5th century AD is known as the Patristic Age, or the Age of the Fathers. As we learned before, the Church Fathers were admirers of the teaching of Plato and, maintaining that whatever was true was from God, worked to reconcile the sublime principles of Plato with the divine message of Sacred Scripture. We ought not to look at this as an attempt to baptize Platonism the way many moderns add Christian dress to essentially anti-Christian ideas like Naturalism and Relativism. The teaching of Plato was the product of the right use of the gift of reason and the truths discovered thereby were in many cases more clearly demonstrated than they were at the time in Christianity.

Between the 5th and 9th centuries, Boethius, Cassiodorus, Alcuin and others gathered and preserved the wisdom of the Patristic age, but also sowed the seeds that would give birth to the age to come. The developments of this era were caused not so much by the conscious effort of the period’s scholars to bring in something new, but were forced upon them by the new challenges of the spread of Christianity through Europe. Most importantly, they highlighted the centrality of Dialectic in Christian education and set the stage for the flowering of Scholasticism.

The Old vs. the New

Just as the history of Philosophy moved from the thought of Plato to that of Aristotle, the history of Christian education leads from the focus on the Socratic Method of Plato into a fuller and more technical Logic of Aristotle. However, this move did not come about without controversy. Considering the holy men who stood on the side of Patristic (mystic) philosophy, only fools would happily oppose them. While many of the later thinkers were brilliant men, many of the Patristics bear an important prefix before their names: “St.” The mystics were holy men and a careful balance must have been maintained to gain the benefits of the “new” learning while preserving the “old” sanctity. Unfortunately, this balance was not maintained early on and the young Scholastics took a beating from the mystics.

The first important difference between the old mystics and the new rationalists had to do with the means of discovering religious truth. The mystics believed that true theology came primarily through divine revelation and contemplation. The rationalists, obviously, preferred to seek religious truth by means of Dialectic. In light of the successes of the Church Fathers in silencing all heresies, this new method was cautiously resisted. Unfortunately, undiscerning Scholastics welcomed not only the works of Aristotle, but also the Arabic and Jewish commentaries on them, which corrupted Aristotle’s message and supplied yet more fuel for the resistance.

The second important difference had to do with sanctity. The faith of the Patristic age, characterized by prayer, penance and contemplation, produced many of the Church’s holiest men and women. The apparent desire to shift from faith to reason led many to recall the warning of St. Paul, “Knowledge inflates with pride, but love builds up.” (1 Cor. 8:1). With a rationalistic method the danger always lurks wherein man ceases to trust in the Lord, but leans upon his own understanding (Prov. 3:5). Even today, we recognize the difference in personal piety that exists between contemplative, prayerful Christians in chapels and confessionals and intellectual Christians in the college lecture halls and seminaries. This is a real challenge to Scholasticism–yet one that could, by the grace of God, be overcome for the attainment of more excellent things. While many knew of the danger, too few feared them. One such man was Peter Abelard.

Note: It is interesting to note that scholars who professed such great devotion to St. Augustine as the mystics did, had such a difficult time seeing the good to be found in the teaching of Aristotle. After all, it was St. Augustine who famously encouraged Christians to “plunder the Egyptians” and use all that is good and true among the heathens in the service of God. It seems there was more concern to holding on to the past than for truly honoring the principles of their favorite Doctor.

Peter Abelard was the most illustrious of the early professors at the University of Paris, serving from 1108-1118, when the school was the center of Christian learning in Europe. Abelard enjoyed rock-star status in European circles and boldly employed the rational approach of Aristotle to questions of philosophy and theology. However, he lacked the humility to despise this celebrity status and was filled with pride and irreverence. Ultimately, his famous academic career came to an end through a scandalous affair with the niece of a Church Canon that resulted in a secret marriage and a child born out of wedlock. This famous incident has given birth (no pun intended) to many depictions of the romance of Abelard and Heloise (see right).

After falling, he removed to a Benedictine monastery where he continued to stir up controversy, contradicting many orthodox teachings in the name of “Reason”. His end came when he was at last called out by St. Bernard of Clairvaux, one of the most influential and holy men in the Church in the 12th century. Rather than obeying the call for a retraction of his teachings, Abelard asked to dispute them before a council. After having his writings condemned by the bishops, Abelard appealed to Rome, but received a speedy condemnation from the Holy Father as well. He spent the rest of his life as a monk in Cluny.

The bad example of Peter Abelard appeared to confirm the fears of the conservative mystic Christians. He joined Scholasticism to scandal, disobedience and heresy. Coincidentally, Aristotle taught in his Rhetoric that when the Truth does not prevail in a case, it is the fault of the speaker and Abelard’s failures in this regard are unquestionable. We would do well to learn this lesson as we seek to influence our own society for good today: Our causes may be failing because of our bad example.

To guide the Church through the great challenges faced in the 12th century, Our Lord graciously provided a more than competent guides.

St. Albert the Great, a Dominican, was a master of philosophy who reaffirmed the place of the classical liberal arts in Catholic tradition.  A Doctor of the Church, St. Albert had the following to say, commenting on Wisdom 9:1

In fact, St.Albert even concluded that among the gifts given to the Virgin Mary, included was the perfect knowledge of the classical liberal arts.

St. Thomas Aquinas, a Dominican, was endowed with such grace, humility and wisdom that he was able in his own person to unite these two parties. Joined to Thomas’s unrivalled intellectual powers we find a life with all the devotion of the most blessed mystics. Throughout Thomas’ later years, he was often raised in ecstasies of the most incredible nature. These experiences climaxed in 1273 when, after an ecstasy during Mass, he swore to never write again, saying, “Such secrets have been revealed to me that all I have written now appears to be of little value.” What those secrets were will remain forever a mystery, but what is most important is that we see in St. Thomas the ideal Christian philosopher who possesses both the devotion of a mystic and the reason of a dialectician. This is Scholasticism in the truest and best sense. Unfortunately, that blessed union has rarely been found in the Church and its scarcity leads many into an unnecessary dilemma between the roles of faith and reason.

It is only in the light of this historical context that we can appreciate–and understand–the Summa Theologica. In the Summa, St. Thomas took on all of the questions raised against the Scholastic method and settled them in a clear and faithful manner. Since his death, the Church has repeatedly exhorted Catholic schools to listen to his voice, and all of the Church’s warnings against Modernism might be summed up in three words: “Study St. Thomas”. He was given the most wonderful name—“the Angelic Doctor”–and canonized less than 50 years after his death, in 1323.

Our ignorance of the life and teaching of St. Thomas and the few references we hear made to him from our teachers offers us a clear view of why there is so much ignorance, impiety and confusion in the Church today. We have our light hidden under a bushel basket. St. Thomas, teach us. 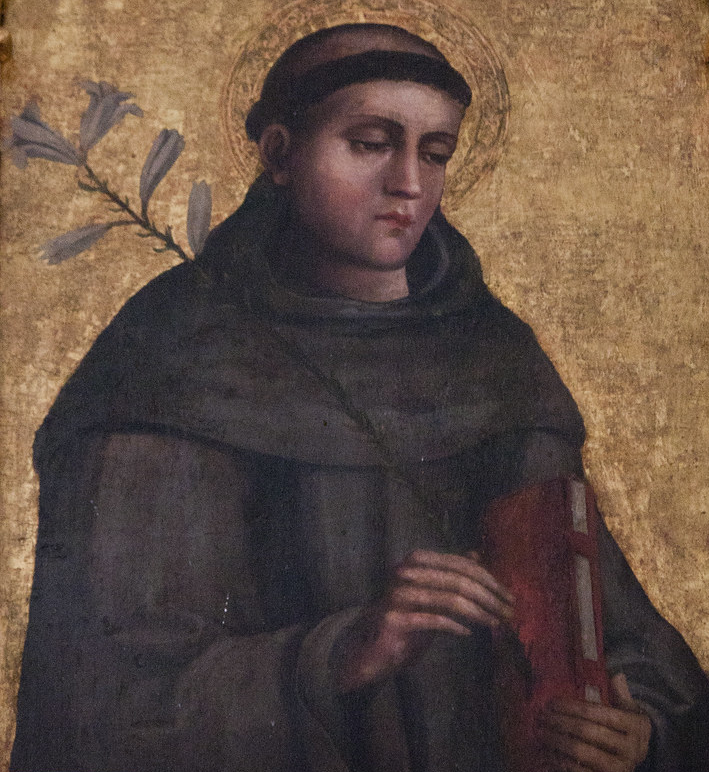 Standing beside St. Thomas in the battle for faith and reason was St. Bonaventure. This holy man enjoyed the privilege of growing up as a child surrounded by saints. His name was given him by St. Francis who exclaimed “O bona ventura!” after curing him of a childhood sickness. If it were not for the shadow cast by St. Thomas, St. Bonaventure would likely be among the most widely known and admired of all saints. Living contemporaneously with the Angelic Doctor, St. Bonaventure was another model of the ideal Christian scholar and served as a professor of Theology at the University of Paris. In him, as in St. Thomas, a burning love and a brilliant mind lived in harmony, which is why he later was named “the Seraphic Doctor”.

St. Bonaventure, a leader among the Franciscans, was known for his great ecstasies, one of which forced St. Thomas (who was visiting) to leave his cell and call him a saint. Among his works was De Reductione Artium ad Theologiam, in which he explained the manner in which all of the arts might be rightly oriented toward and absorbed into Theology. Understanding the historical context and considering the similar challenges and triumphs of St. Thomas, we need say little more of St. Bonaventure. St. Bonaventure was canonized in 1482.

We have now followed the life of the classical liberal arts for well over 2,500 years of human history. In this last lesson we have looked at the challenges European Christians had as they sought to reconcile the sanctity of the Church Fathers with the analytical genius of Aristotle. We have learned of the failures of Peter Abelard, who is fittingly remembered for his romantic activity more than for any religious devotion. We have learned of God’s answer to the difficulty, by and through His Church, in the equipping and exaltation of two illustrious scholars: St. Thomas Aquinas and St. Bonaventure. The result of the achievements of these two faithful friends is the flowering of medieval learning and culture as the classical liberal arts curriculum reached full maturity in world history. In future lessons we will learn of the steady decline of the classical curriculum and its ultimate extermination as modern attacks on Christianity collaborated to snuff out the light of faith and reason in the modern world.

Home » Classical Catholic Library » What is the Catholic Homeschool Curriculum? » VIII. The Arts in the Higher Middle Ages