In our previous lessons, we have seen how the classical liberal arts curriculum developed throughout history–from its origin in the rational nature of man and through the refinements and advances of many generations. Ultimately, the classical liberal arts curriculum was taken up by the Catholic Church, which, in the 12th and 13th centuries, brought it to perfection. We also saw how this intellectual cornering of anti-Catholics provoked the emotion and zeal that fueled the Renaissance, the Protestant Reformation and, the granddaddy of them all–the Scientific Revolution.

From New Method to the New World

If your American history is shabby, it might be worthwhile to give it a little exercise. When many think of American history, they usually begin with the Declaration of Independence and Revolutionary War. Many remember Christopher Columbus who “in 1492 sailed the ocean blue”, but few realize that his discovery was made was 25 years before the Protestant Reformation began with Luther’s 95 Theses in 1517. Within a century from Columbus’s voyage, European powers began sending ships in hope of finding what Columbus originally sought: a more profitable trade route to the Indies. Thus, the Americas were initially settled by kings’ men in hope of improving their nation’s international trade.

As the first colonies were established in America, they often failed–either because the colonists died or because the goods received from the native Americans did not impress the European sponsors of these voyages and funds were cut off. Nevertheless, it was a matter of fact that there was now a place to live outside of Europe–far away from kings and bishops. This new land attracted the most radical of the anti-Catholics who were so vehemently hateful towards the Church that they condemned even the Church of England for attempting to maintain something of Christian tradition. The Puritans, for example, ordained themselves as preachers, started their own churches and threw everything they didn’t invent themselves out for the sake of “purity”. These radicals ultimately found themselves in trouble with the law in England and saw America as a refuge. Thus, America was ultimately filled with men eager for either (a) financial gain and/or (b) religious license.

This spirit of profit-seeking and religious license led to the ideals and institutions that make America what it is today. America was formed as a melting pot of unorthodox religious factions that ultimately found their unifying bond in the cares of this world–not those of that which is to come.

In colonial America, school was a private matter with a heavily religious focus as the original documents prove. “The Old Deluder Satan Act” was passed in Massachusetts in 1647 to make sure towns provided for the education of their children, with all the anti-Catholic fire we would expect from Puritan Americans:

“It being one chief project of that old deluder, Satan, to keep men from the knowledge of the Scriptures, as in former times by keeping them in an unknown tongue, so in these latter times by persuading from the use of tongues (see note below), that so that at least the true sense and meaning of the original might be clouded and corrupted with false glosses of saint-seeming deceivers; and to the end that learning may not be buried in the grave of our forefathers, in church and commonwealth, the Lord assisting our endeavors.

It is therefore ordered that every township in this jurisdiction, after the Lord hath increased them to fifty households shall forthwith appoint one within their town to teach all such children as shall resort to him to write and read, whose wages shall be paid either by the parents or masters of such children, or by the inhabitants in general, by way of supply, as the major part of those that order the prudentials of the town shall appoint; provided those that send their children be not oppressed by paying much more than they can have them taught for in other towns.

And it is further ordered, that when any town shall increase to the number of one hundred families or householders, they shall set up a grammar school, the master thereof being able to instruct youth so far as they may be fitted for the university, provided that if any town neglect the performance hereof above one year that every such town shall pay 5 pounds to the next school till they shall perform this order.”

Note: The Catholic Church was routinely accused of keeping the Bible away from people. The Douay-Rheims Catholic Bible was printed in English in 1610. This act was written in 1647.

Thus, communities organized schoolhouses where upper class children gathered for instruction in reading, writing and arithmetic. In the larger cities, Grammar schools were established where a traditional course was offered to prepare students for the university. Such studies were normally pursued in Europe. Education in America became more efficient in the late-17th and 18th centuries as Americans established their own colleges, now known primarily as the “Ivy League” schools: Harvard, Yale, Princeton, Penn, Columbia, Brown and Dartmouth–along with William and Mary and Rutgers. The U.S. government also took the first steps toward public schooling with the Land Ordinance of 1785, which established an area of land in every township for public education.

In 1789, however, when the Constitution was established, the American government obtained the power to collect taxes. That changed everything.

After the establishment of a federal government in the United States, the ability to collect taxes gave educators and lawmakers a means of ramping up this mission. In Europe, the increase in secular power that followed the Reformation inspired rulers to create public school systems for the indoctrination of children in the interest of social obedience. The leader among these states was anti-Catholic Germany, which instituted a public school system beginning with kindergarten. In 1763, education was required for all German children between ages 5 and 13.

Nevertheless, the German model was of great interest to the American leaders who wished to establish an obedient and productive citizenry of their own. While originally established as a land of freedom, the newly formed American government took on an identity of its own to which the interests of the individual were to be subordinated. The means by which this spirit of obedience, sacrifice and devotion was to be taught was the public school system.

In 1852, the German system was adopted in Massachusetts through the leadership of Horace Mann (1796-1859), who is styled the “father of American public education”. After it was established in Massachusetts, it was quickly embraced also by the state of New York, Connecticut and others. It should be noted that the rhetoric with which these schools were promoted was that all citizens deserved equal opportunity in education, but that was not the true intent. To add to the rhetoric, these schools were referred to as “free schools” even though they were funded by American taxes. Behind all the patriotic rhetoric was an age-old plan to control the common people.

Anti-Catholicism in the Public School System

As in Germany, the American public school system was inherently Protestant, though professedly “non-sectarian”. However, non-sectarian meant Protestant inasmuch as “Sola Scriptura” was the definition of allowable religious teaching. Thus, the fundamentals of the Catholic faith: the role of sacred tradition, the authority of the priesthood, the necessity of the sacraments and so on were forbidden, while Bible reading from the King James Version was allowed.

As the early Americans were Protestant in doctrine, their creed was thought of as the “faith of our fathers”–and is in America to this day. In the mid 1800s, Catholic immigration–from Ireland in particular–increased dramatically and the establishment of schools in Catholic communities led many anti-Catholics to fear the possibility of Catholic schools being funded with American (i.e., Protestant) money. As a remedy, the infamous Blaine Amendments of the 1870s were proposed in the U.S. Senate, and while not making it through the national legislature, they were passed by most states and made law. The Blaine Amendments made the use of state funds for “sectarian” schools illegal, arguing that the preservation of sectarian traditions like Catholicism prevented the development of the new American citizenry. It is odd that today, we find Protestants speaking out so loudly against secularism in the United States, when it was their anti-Catholic forefathers who wrote the laws that created the society they pretend to despise! 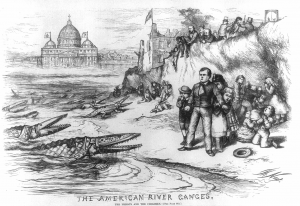 In 1875, Nast published the following cartoon, titled “The American River Ganges”. In the illustration, we find a brave schoolteacher protecting his terrified and prayerful students from an invading army of Catholic bishops made to resemble crocodiles! The poor U.S. school building is in a state of emergency while the powerful, wealthy Roman Catholic Political Church and School press upon the shores. Fortunately, the school teacher has his Bible tucked into his shirt to protect him and his little Americans from the Catholics. The bias is pretty clear, no? 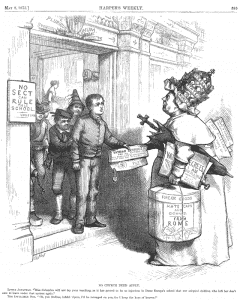 Again, Thomas Nast published the following image, titled “No Church Need Apply” around the same time. We find a church official wearing three crowns of Church, State and School trying to enter the school with decrees from the Vatican demanding control. However, he is checked by a message from Uncle Sam that no “sect” can rule this school and a faithful public school teacher guarding the door. Is it not clear that the “anti-sectarian” rhetoric has a specific enemy in view? Is the Catholic Church indeed a “sect” that threatens what is presented as an established American society? This American society is barely 100 years old!

We believe that the Catholic Church is the true Church established by Jesus Christ, inspired by the Holy Spirit and protected by the power of God for all time. The waves of rebellion against the Church in the 15th-16th centuries spilled onto the shores of America in the 17th and 18th centuries where heretical refugees sought to hide themselves from lawful religious authorities. Once here, an effort to establish a Protestant America was launched, though with a number of different disguises to promote a superficial sense of higher purpose and national identity. Once the rhetoric is cleared away, however, we find a violent attack on Catholic tradition and that upon the common people–just as it had been in Europe by Luther and his fellow reformers. The early Americans established a federal government, raised taxes and opened anti-Catholic schools aimed at protecting Americans from foreign influences and at assimilating immigrants (especially Catholics) to the state religion of America: Protestantism.
The model followed by the Americans was the secular model of the Germans. The laws and precedents were recklessly established that guaranteed that religion would one day be effectively eliminated from the American mind, yet Christians appear confused today just how this happened! The classical liberal arts, inasmuch as they represent the old world had no place whatever in the American schools. The curriculum turned from heaven to earth as it sought to make political control and economic gain its chief ends, rather than the knowledge, love and service of God.