In recent lessons, we have studied five very important events in ancient history: the life of Abraham, the Hebrew Exodus, the Trojan War, the Life of David and the building of the Temple of Solomon. You should be able to explain the history of the world from the beginning of the life of Abraham to the building of the Temple. If you cannot, spend some time reviewing your recent lessons until you can. 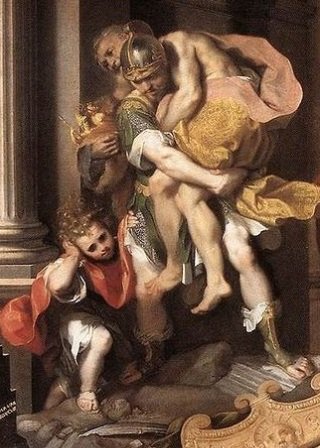 We learned about the Trojan War between the Greeks and the men of Troy. We know that the battle was fierce and that the Greeks won by deceiving the Trojans. To Greek people, the victory at Troy was a great strategic victory, in which they out-smarted the Trojans. To the Trojans, it was a wicked lie that showed the Greeks to be no worshippers of the gods and that caused many good people to lose their lives and freedom. We learned that as Troy was attacked, one of their greatest soldiers escaped and sailed away with several of his family members and friends. This man was named Aeneas.

How can we learn of the founding of the city of Rome? There is no history. There are no records. The city was small and unimportant during its early years and none thought to record its first steps. To learn about the founding of the city of Rome, we must trust the famous Roman poet Virgil and the great Roman historian named Livy. Both of these men lived around the time when Jesus Christ came into the world, or 750 years after Rome was founded.

When we speak of poets in the ancient world, we don’t simply mean men who write poetry using rhyme and meter as men do today. The Greek word poietes means one who creates, and poets are creators–makers of stories and myths. The same word is used to say God “created” (epoiesen) the world, and that God is the Creator (poiesas). Again, we must be careful because when we use the word “myth” today, we usually mean a fairy tale or some made-up story like Sleeping Beauty or the Lord of the Rings, which is not meant to be a real explanation of how things happened in the past. In the modern world we are taught that “seeing is believing” or that we should believe nothing that cannot be proven, but this is bad advice.

There are many things modern scientists and historians cannot “prove” and therefore many things that we cannot learn by their help. For example, a scientist cannot teach us about how the world began or whether our souls live after our bodies die. The modern historian cannot prove whether Moses really saw a burning bush or not, or whether Jesus Christ will judge the world. If you think about it, the questions that scientists and historians cannot answer are the most important questions in our lives!

Where there is no proof for our eyes to see, for our hands to touch or our ears to hear, men have other helpers. First, spirits can reveal things to men that no one has ever seen or known. Just as the prophets were guided by God and the angels, the poets of the ancient world were helped by the muses (see illustration), who were spirits that inspired and helped poets, musicians and artists. Even today, when we wish to see the works of great artists, we go to a musaeum–the place “of the muses”.

The poets relied on the help of the muses and normally opened their poems with a prayer for their help. We must believe that the poets did receive their help and were able to “see” the past in mysterious ways.

Second, the poets used their human reason to answer questions about the past. Human reason allows us to infer or “figure out” what probably happened in the past based on other things we know happened or on what we see happening in the present. The combination of these–inspiration and reason–are our guide to understanding how the famous city of Rome was established.

The poet Vergil tells us the story of the fall of Troy and what followed for the Trojan soldier Aeneas. As the city burned on the night of its destruction, the spirit Venus appeared to him and ordered him to find his family members and escape by sea. Aeneas felt that this was cowardly but was persuaded that Destiny had great plans for him: that he would build a new Troy, greater than the first.

Aeneas ran through the city in pursuit of his family members and found his elderly father, Anchises, and his son Ascanius, also known as Iulus. Aeneas searched madly for his wife Creusa, calling for her through the streets when her spirit appeared to him, revealing her death to him and pressing him to escape immediately. Their tragic goodbye is worth reading:

She spake, “Farewell! Guard well the love we cherished for your child and mine!”

So saying, she left me weeping, yearning painfully to speak, and vanished into empty air. Three times, as she stood, my arms I would have flung about her neck, and three times my baffled hands closed upon nothing.1

At last, Aeneas escapes and sails away from Troy, westward, as destiny led him. As always, great things are only possible with great sacrifices, and Aeneas suffers a number of trials after leaving Troy. Aeneas set out on his journey much like Abraham, full of hope, yet unsure where he was going or where his travels would end. His father Anchises died and was buried on an island in an early stage of their journey. His fleet was wrecked upon the shores of North Africa by Aeolus, the god of the winds. In North Africa he fell in love with the famous queen Dido but was forced by his fate to leave her–a breakup that led to her suicide. When he finally arrived on the shores of Italy, he found an enemy army there, which called him into battle at the end of such an exhausting time at sea. Nevertheless, at last, Aeneas was victorious.

Here the story of Virgil ends, yet we find no established city. In fact, the city of Rome would not be established for another 450 years (Remember: the Trojan War took place around 1200 BC.). To learn of the events that connect the arrival of Aeneas to the city’s founding, we must rely on the historian Livy who wrote the early history of Rome.

According to Livy, one King Numitor, a descendant of Aeneas, ruled the city known as Alba Longa. His brother, Amulius, who coveted the throne, killed Numitor’s son and forced Numitor’s daughter, Rhea Silvia, into a convent as a celibate priestess of the goddess Vesta. This plan was intended to give Amulius complete power in Alba Longa with no competition from the children of Numitor.

However, the god Mars came to Rhea Silvia and had relations with her. In due time, the priestess bore twin sons, Romulus and Remus. Amulius learned of the birth of the twins and imprisoned Rhea Silvia, while ordering a servant to kill the infants. The servant, unwilling to commit this crime, set the boys down the Tiber River that Destiny might do with them as she pleased. The twins washed ashore upon a bank where they were cared for and nursed by a wolf who had lost her babies.

Eventually, the boys were found by a couple who raised them to manhood. After coming to full age and strength, Romulus and Remus found a city, named it appears after Romulus: Rome. They also put Amulius to death and restored their grandfather Numitor to his throne in Alba Longa. Thus, in the end, the city of Rome was established by the descendants of Aeneas, and thereby of Troy. It was foretold, even to Aeneas, that this city would become the greatest city on earth.

The founding of Rome was the beginning of time for all Roman people, and throughout Roman history, the year was calculated ab urbe condita (AUC)–“from the founding of the city”. Jesus Christ came to earth in 753 AUC, which for us would be the year 0 BC/AD. Working in reverse, we say that the city of Rome was founded in 753 BC.

We have thus moved from the beginning of the world to the founding of the city of Rome, “the Eternal City”. Can you tell the story thus far?