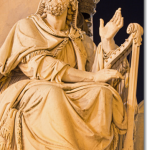 The following is taken from Thomas Taylor’s “Theoretic Arithmetic” (1818) Arithmetic is to be learned the first of the mathematical sciences, because it has the relation of a principle and mother to all the rest. For it is prior to all of them, not only because the fabricator of the universe employed this as the first paradigm of his distributed intellection, and constituted all things according to number. But the priority of Arithmetic is also evinced by this, that whenever that which is prior by nature is subverted, that which is posterior is at the same time subverted; but when … Continue