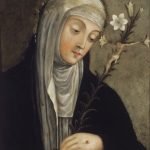 Chapter 2 Birth of Catherine; her infancy; wonderful circumstances that take place. Lapa became the mother of two delicate daughters at a birth (1347); but the weakness of their bodies wo not destined to impair the energy of their souls. The mother, not being able to nourish both, found herself obliged to confide one of … Continue

Chapter 1 Of Catharine’s Parents and their worldly condition. There lived in the city of Sienna, in Tuscany, a man named Jacomo, who was descended from the family of the Benencasa, a man simple, loyal, fearing God, and separated from every vice. After losing his parents he married a countrywoman called Lapa. This woman had … Continue