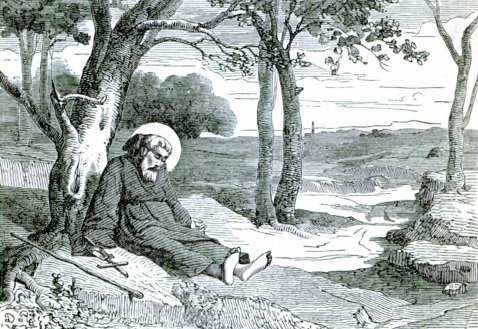 St. Benedict of Anian was the son of Aigulf, Governor of Languedoc, and was born about 750. In his early youth he served as cupbearer to King Pepin and his son Charlemagne, enjoying under them great honors and possessions. Grace entered his soul at the age of twenty.  He resolved to seek the kingdom of God with his whole heart. Without relinquishing his place at court, he lived there a most mortified life for three years; then a narrow escape from drowning made him vow to quit the world, and he entered the cloister of St. Seine.

In reward for his heroic austerities in the monastic state, God bestowed upon him the gift of tears, and inspired him with a knowledge of spiritual things. As procurator, he was most careful of the wants of the brethren.  St. Benedict was always most hospitable to the poor and to guests. Declining to accept the abbacy, he built himself a little hermitage on the brook Anian.  For some years he lived in great solitude and poverty. But the fame of his sanctity drawing many souls around him, he was obliged to build a large abbey.  Within a short time governed three hundred monks.

St. Benedict of Anian became the great restorer of monastic discipline throughout France and Germany. First, he drew up with immense labor a code of the rules of St. Benedict, his great namesake, which he collated with those of the chief monastic founders, showing the uniformity of the exercises in each, and enforced by his ” Penitential” their exact observance; secondly, he minutely regulated all matters regarding food, clothing, and every detail of life; and thirdly, by prescribing the same for all, he excluded jealousies and insured perfect charity. In a Provincial Council held in 813, under Charlemagne, at which he was present, it was declared that all monks of the West should adopt the rule of St. Benedict. He died February 11, 821.

REFLECTION—The decay of monastic discipline, and its resto ration by St. Benedict, prove that none are safe from loss of fervor, but that all can regain it by fidelity to grace.