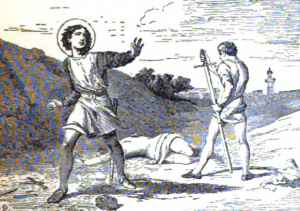 In 976, Sergius, a nobleman of Ravenna, quarrelled with a relative about an estate, and slew him in a duel. His son Romuald, horrified at his father’s crime, entered the Benedictine monastery at Classe, to do a forty days’ penance for him. This penance ended in his own vocation to religion. After three years at Classe, Romuald went to live as a hermit near Venice, where he was joined by Peter Urseolus, Duke of Venice, and together they led a most austere life in the midst of assaults from the evil spirits. St. Romuald founded many monasteries, the chief of which was that at Camaldoli, a wild desert place, where he built a church, which he surrounded with a number of separate cells for the solitaries who lived under his rule. His disciples were hence called Camaldolese. He is said to have seen here a vision of a mystic ladder, and his white-clothed monks ascending by it to heaven. Among his first disciples were Sts. Adalbert and Boniface, apostles of Russia, and Sts. John and Benedict of Poland, martyrs for the faith. He was an intimate friend of the Emperor St. Henry, and was reverenced and consulted by many great men of his time. He once passed seven years in solitude and complete silence. In his youth St. Romuald was much troubled by temptations of the flesh. To escape them he had recourse to hunting, and in the woods first conceived his love for solitude. His father’s sin, as we have seen, first prompted him to undertake a forty days’ penance in the monastery, which he forth with made his home. Some bad example of his fellow monks induced him to leave them and adopt the solitary mode of life. The penance of Urseolus, who bad obtained his power wrongfully, brought him his first disciple; the temptations of the devil compelled him to his severe life; and finally the persecutions of others were the occasion of his settlement at Camaldoli, and the foundation of his Order. He died, as he had foretold twenty years before, alone, in his monastery of Val Castro, on the 19th of June, 1027.

REFLECTION– St. Romuald’s life teaches us that, if we only follow the impulses of the Holy Spirit, we shall easily find good everywhere, even on the most unlikely occasions. Our own sins, the sins of others, their ill will against us, or our own mistakes and misfortunes, are equally capable of leading us, with softened hearts, to the feet of God’s mercy and love.