Skip to content
Home » CLAA Blog » When was the World Created? 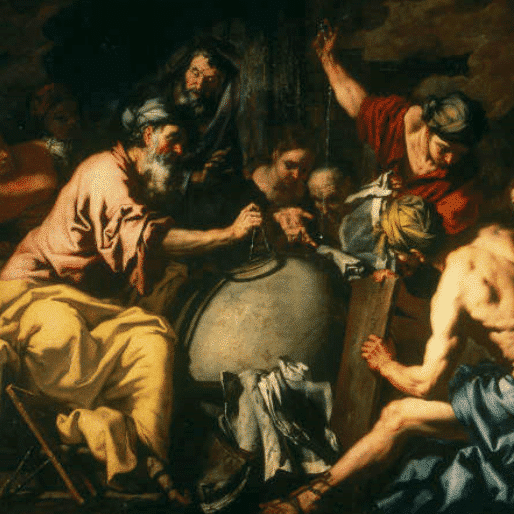 I have a correction to make in the Classical Liberal Arts Academy’s World Chronology course.

In the course, I list the date of the creation of the world to be 4,000 B.C.  Over Easter weekend, however, a Catholic friend showed me that this should not be the date used in the course.  It is too early, and the improved date can actually be found in the text of the Divine Office of the Catholic Church.

Now, in modern circles, it’s common for us to hear that the earth is millions or billions of years old.  Many Catholics have embraced this dating of the earth, but I believe that most or all of them have done so prematurely, and wrongly.  I understand that this “old earth” idea of dating is common in schools and universities today, but there’s a problem with it that very few are aware of.

There is no demonstrative evidence that the earth is millions or billions of years old–nor can there be.  No one who talks about these numbers has any evidence that can prove for us that it is so.  These dates are proposed after a theory is first accepted, which most Catholics don’t even know about. It’s the theory of the uniformity of nature.

This theory is very easy to understand.  It states that all natural processes occur at the same rate that they have throughout the history of the world.  So, if  a river running through a mountain causes one inch of stone to wear away every 50 years, and we see that 720 inches of stone have worn away, we can proposed–assuming the theory of uniformity–that this river has been running through this mountain for 720 x 50 years, or 36,000 years.

Pretty simple calculation–but there’s no evidence for it.  It’s a theory based on a theory.  It’s not, scientifically speaking, “true”–at all.

Archaeologists and other scientists make their calculations based on the same theory of uniformity, and this is where their dates come from when they say that the earth is millions or billions of years old.  This is stated plainly by scientists, but few Catholics actually study and learn these things before pretending to “follow the science”.

It’s a theory based on a theory–and I, for one, reject the theory of uniformity.

This is why, in the Classical Liberal Arts Academy’s World Chronology course, I use a traditional Christian date for the creation of the world, and that date is 4,000 BC.

However, this weekend, a Catholic friend writing to support me in a discussion with a number of Catholics who embrace the “old earth” theory based on the theory of uniformity, showed me that the Catholic Church’s traditional teaching supported my position, but that the Church assigned a different date to Creation.

The date of the creation of world, given by the Catholic Church was 5,199 B.C.

So, where was this date found?

Was it in some obscure writing of a saint or doctor of the Church?  No.

Was it revealed by some questionable private revelation received by a saint in Church history?  No.

The source of the date is much more authoritative than any such source.

The date of the creation of the world was published in the Divine Office–the official prayer of the Church.  In the office of Prime, on December 24th, in the Martyrology, we read the following:

In the year 5199th from the creation of the world, when in the beginning God created the heavens and the earth, in the year 2957th from the flood, in the year 2015th from the birth of Abraham, in the year 1510th from the going forth of the people of Israel out of Egypt under Moses, in the year 1032th from the anointing of David as King, in the 65th week according to the prophecy of Daniel, in the 194th Olympiad, in the 752nd from the foundation of the city of Rome, in the 42nd year of the reign of the Emperor Octavian Augustus, in the 6th age of the world, while the whole earth was at peace, Jesus Christ, Himself Eternal God and Son of the Eternal Father, being pleased to hallow the world by His most gracious coming, having been conceived of the Holy Ghost, and when nine months were passed after His conception, (all kneel down) was born of the Virgin Mary at Bethlehem of Juda made Man, Our Lord Jesus Christ was born according to the flesh.

This was published in the 1960 edition of the Divine Office–and the versions before that.  It was published and recited by the clergy and religious of the Catholic Church–for centuries.

Now, some say that this old doctrine concerning the creation of the world was made obsolete by the discovery of evolution by Charles Darwin, which view was welcomed into the Catholic Church by Pope Pius XII in his encyclical, Humani Generis, this is not so.  The text of the Divine Office containing this dating of the creation of the world was published in 1960.  Humani Generis had already been published 10 years ealier.  Darwin’s “Origin of Species” was published in 1859–a full century earlier.  If the modern theories of uniformity, evolution, etc., were embraced by the Church, this prayer should have been removed–but it wasn’t.

So, I am happy to see that I have some more authoritative dates to use in the Classical Liberal Arts Academy’s World Chronology course.  This, however, is a correction I am happy to learn of.

Mr. William C. Michael is the founding headmaster of the Classical Liberal Arts Academy.  He graduated from Rutgers University with an honors degree in Classics & Ancient History and is a member of Phi Beta Kappa and the National Association of Scholars.  Mr. Michael has worked in private education as a Classics teacher and administrator for over 20 years.  He is a Roman Catholic homeschooling father of ten children, and keeper of a quiet family farm in North Carolina.  Mr. Michael enjoys studying ancient natural philosophy, gardening, and running.