Home » CLAA Blog » Why English Spelling is So Difficult

This article was originally published in 2010.  The CLAA Petty School, which is referred to in this article is being reproduced in 2021.

Impatience is the greatest enemy of education and very few families or schools have the patience to study what is necessary to understand complicated subjects.  We might think of Metaphysics or Logic as complicated, but there is a subject more complex than these right at the front door of education:  English Phonics.

As the CLAA’s Petty School program continues through development, we are challenged by the complexity of English phonics and the sloppy attempts other programs have made at teaching them.  Modern Spelling programs simply throw lists of sounds and spellings at children to be memorized, but these oversimplify the real challenges of English phonics and ultimately leave students without any guide to read or spell words they have not memorized or seen in reading.  The challenge has prompted me to explain the source of this confusion and to incorporate this knowledge into our Petty School program.

When Greek and Latin were in use, life was good for young students.  Every letter in these languages represents only one sound and spelling is no more difficult than hearing a sound and writing its letter.  Greek was harder than Latin because of its letter names, but still there was a simple relationship between spoken sounds and written letters.

The CLAA’s Petty School program introduces students to spelling and reading through classical phonics for this very reason:  it makes sense.  Studying the “rules” in modern English Phonics books leaves any honest student or teacher wondering what the purpose of a rule is that never seems to work outside of the primer.  If the rules worked, wouldn’t we be able to read any English book?  If we wish to make phonics simple why not teach simple phonics?

Here is a look at the simplicity of Greek and Latin Phonics: 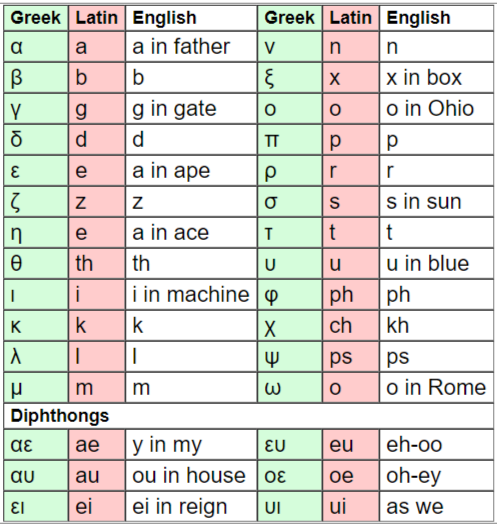 Wouldn’t it be nice if Phonics was that easy?  Rather than having a K-6 Phonics program, we would teach all that there is to know about letters and sounds in a few hours.  Such was the simplicity of classical Phonics.

We must remember that throughout history most common people did not read.  Much less energy was put into writing and more was put into speaking.  As a result, the pronunciation of words was often changed for the sake of euphony or “sounding better”.  In books and print, the words remained in their old forms, but in speech the sounds changed.  This is where Ecclesiastical (or Italian) Latin pronunciation comes from, and none would deny that the Pater Noster sounds much nicer in Ecclesiastical than in Classical Latin.

We are familiar with the changes of Ecclesiastical Latin.  The written letters J and V were introduced to distinguish the consonant use of the letters I and U.  The letters C and G received softer pronunciations before the sounds E and I.  The diphthongs AE and OE were changed to sound as the Latin E, or English EY in “they”.  In speech, all of this was wonderful, but in writing, things became much more difficult.

For example, if a child heard the sound of the English syllable “jace”, he would be hard pressed to know whether it was spelled JES, JAES or JOES in his medieval Latin.  Here begin the challenges we find in modern English.

The History of English

When many think of the English language, they think of William Shakespeare and the King James Bible.  However, English was brought to England by Germanic tribes.  By Germanic tribes, we do not mean Germans.  We mean the northern barbarian tribes against whom the Romans fought on the northern borders of the Roman Empire.  These tribes, being pressed north and west by the Roman armies moved into Britain and brought their language with them.  This was the origin of our English.

As a soil sample can reveal the history of a piece of land, or the rings of a tree the history of an area’s weather, the English language contains the history of England.  Early English was heavily influenced by Latin as the peoples interacted on the borders of the Empire.  The Romans abandoned Britain around 400 AD and thereafter the British isles were up for grabs.  This led to a succession of wars and conquests, during which the language received new influences.  First, the Anglo-Saxons controlled the island and their language likewise dominated.  Later, the invasions of the Vikings or Norsemen (North-men) brought in a northern Germanic influence.

During this same period, Christian missionaries brought the language of Christianity with them as well as the knowledge and use of Latin and Greek.  Thus, to English was added another wave of Greco-Roman influence. Christian ideas as well as Christian words were borrowed by the northerners.   This is the language we call “Old English”, in which the poem Beowulf is written (see image above).  In the original text, you would probably not be able to read it, even though it is “English”.  View the video below to hear/read the Lord’s Prayer in Old English:

In 1066, the Normans conquered England.   The Norman nobility spoke French and thus Old English came under the influence of French.  Words of French origin were brought into English during this time, adding to the mess!  It is for this reason that the “common people” of England tended to bear the marks of early Germanic culture and the English nobility more of the French aristocracy.  The English of this period is named “Middle English” and was the language in which Geoffrey Chaucer wrote The Canterbury Tales (right).  As with Beowulf, you would probably not be able to read it in its original form, even though it is “English”.

In the 1400-1500s, yet another great change took place that made English what it is today.  While the causes of this movement are not known, we do know that most English vowels shifted to a “higher” pronunciation.  What this means is that the position of the tongue was held closer to the palate at the top of the mouth.  These changes are summarized below: 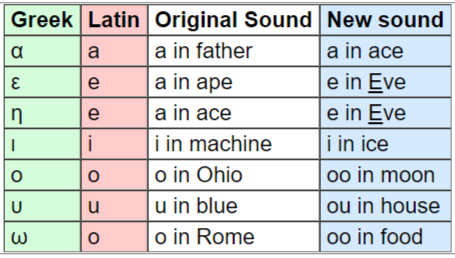 Unfortunately, it was during the time of the “Great Vowel Shift” that the printing press was brought to England (around 1470).  With no standardized spelling in palce, English printers had to decide how words should be spelled, but these spellings often varied between older and newer pronunciations!  For this reason we see varying spellings, such as jail spelled as gaol and Britain as Briton or Breton in early English books.

With William Shakespeare in the late 1500s, we find the advent of what we know as modern English. In the image on the right, you can finally read English!  Notice also that, unlike the texts of Beowulf and Canterbury Tales above, Shakespeare is printed, not hand-written.  Though the language of Shakespeare may be hard for some to follow, we can recognize the words and spellings, which we can hardly do in Old or Middle English.  Nevertheless, they are still spelled differently.  Note the words: reade, walke, sleepe and dreame.

To this modern English is added the influence of the so-called “Renaissance”, which was marked by a renewed interest in Greek and Latin literature. This led to yet another influx of classical words to English.  On top of this we find the scientific revolution, which led to volumes of newly coined scientific and technical terms, most of which were named according to Greek and Latin originals.

As the English monarchy was by this time firmly committed to English, a notion of “the King’s English” allowed spelling to be standardized.  The solution to the mess of English was found in the development of Dictionaries, which standardized the pronunciation and spelling of words.

In 1755, Samuel Johnson published the first authoritative English dictionary.  This dictionary established what we now think of as “British” English.  While that could have provided us with a solution for all time, a separate dictionary was published in America by Noah Webster in the 1780s.  Webster’s work established what we think of as “American” English, along with its spellings.  Thus, even among English dictionaries we find variety and confusion!

To further standardize spelling, Noah Webster published the first widely used “Spellers” and “Readers”.  Unfortunately, even in the Spellers, the hope of spelling well was quenched.  Mr. Webster wrote, for example, on the sounds of the letter J:

“these varieties are incapable of being reduced to any general rule, and are to be learnt only by practice, observation and a dictionary, in which the sounds are designated.”

English spelling, therefore is not an art to be gained through the learning of rules and putting them into practice.  It is a skill based entirely on the understanding of the history of the English language and its sources combined with a commitment to pay attention to the correct spelling of words and to never err from them, using a dictionary to settle any doubt.

In light of the complex history of the English language, one can easily understand why our poor kids are tortured by English phonics and spelling!  There is no system of rules that will enable a child to be a competent speller other than a lifelong commitment to the study of language, attention to spelling and frequent use of a dictionary.  It is in light of this reality that Noah Webster noted in the opening of his first Spelling book:

“In a perfect language, every simple sound would be expressed by a distinct character; and no character would have more than one sound.  But languages are not thus perfect; and the English language, in particular, is in these respects, extremely irregular.”

The CLAA’s Petty School program is the only program that addresses the reality of the complexity of English phonics and teaches it in a rational way.  Programs that pretend that there are rules for Spelling disagree with not only history, but also the authors of our first dictionaries.  Beginning with the simple classical phonics, we teach children the history of English and make them aware of the complexity of their native language and how to succeed in its use.

Therefore, if you’re frustrated by Spelling, you must first take the posture of Socrates, whose wisdom consisted in his admission that he knew nothing and in asking questions.