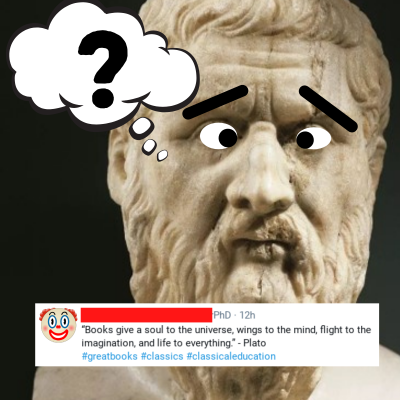 Christian people tend to think that they are pretty smart and that they seek the truth.  Yet, when we look at Christian education, the evidence suggests otherwise. Since around 1995, the “classical education” movement has lied to Christians, making up their own history of education, and using this fictional story to sell millions of dollars of homeschool products, and start schools–even colleges!

The lack of confidence in modern Christians, owed to their neglect of Christian studies, leaves them afraid to ask questions or seek proof for things asserted by homeschool publishers and conference speakers.  Christians are like the people in “The Emperors New Clothes” who are willing to deny their own eyes and pretend that they see the emperor’s clothes, for fear of offending him.  Christians are afraid to ask a person, “Can you provide evidence to support that statement, please?”

This morning, a crystal clear example of this appeared on my Twitter feed, which I’m sharing in this post (see right).  This post represents a million of posts and articles and videos and books just like it.

We see a woman who presents herself as a consultant on homeschooling and education, using the hashtags #classics and #classicaleducation.  She commends herself in her screen name with her doctoral degree– “Ph.D.”  She posts a beautiful picture of a monastery library, and shares a quote from the Greek philosopher Plato:

“Books give a soul to the universe, wings to the mind, flight to the imagination, and life to everything.”

The problem with this quote is that Plato never said any such thing.  Now, that might not be a big deal if the idea was taught by Plato, but this is where things get really bad.  This quote actually contradicts everything Plato teaches about learning and explictly contradicts what he wrote about books.

In his work Phadreus, Plato says the following–please read it.

“[Writing] will create forgetfulness in the learners’ souls, because they will not use their memories; they will trust to the external written characters and not remember of themselves. The specific which you have discovered is an aid not to memory, but to reminiscence, and you give your disciples not truth, but only the semblance of truth; they will be hearers of many things and will have learned nothing; they will appear to be omniscient and will generally know nothing; they will be tiresome company, having the show of wisdom without the reality.”

Now, when this passage is mentioned all the smart-alecks like to comment that Plato wrote books and is contradicting himself.  This only shows that they didn’t pay attention to what Plato said.  He doesn’t say books are bad.  He says the danger of books is that they allow people to pretend they are learning, while they do not do so.  What he describes is exactly what we see in the modern “Great Books” and “classical education” movement–and in modern education in general.  He warns about books making it possible for men to “have the show of wisdom, without the reality”.

This is what we find in the modern “classical education” movement, which is perfectly represented in the Tweet I shared.  This woman presents all of the signals of this “show of wisdom”–a doctoral degree, a beautiful library, a quote from a celebrity, etc.  Yet, in this message, she reveals that she does not possess the reality of wisdom.  Her quote is mere fiction, a falsehood.  Her reference to Plato is false.  Her attempt to persuade readers of her position is a fallacy.  Yet, if you look, the post, in just 12 hours, received 68 “likes” and over 20 “shares” from Christian readers.  They love this false message and won’t consider for one moment whether it’s actually true, or whether Plato actually said that.  It says what they want to be true, therefore it is good.

This is the modern “classical education” movement.

Whether they’re copying and pasting quotes from Dorothy Sayers (whom they know nothing about), or making up quotes from ancient wise men that were never said, talking about “designing their own curriculum”, writing about the classical “stages of learning”, claiming that they use the “Socratic Method”, and study the “Great Books” (you know, like the saints always did)–there is no slowing down the runaway train that mass-produces books and videos and websites and podcasts pushing this completely false message with one objective:  to sell stuff to suckers.

In the end, the Christian parents are to blame.  Whether its homeschool study materials or school tuition, they fall for every bit of it without asking for proof at any step of the way.  They are so ignorant, so uncertain, so timid and so irresponsible that they gobble it all up without asking, “Wait, is this true?”.  Credit cards are out, they are buying boxes of books, they are liking and sharing  posts all over over the internet–it’s painful to watch.

It would be understandable for Christians parents to be ignorant of the writings of ancient philosophers, but it is NOT understandable why they do not ask for proof.  It is also not understandable how they can fall for these things because these things are denied by our own sacred writings–which we’re supposed to be studying and teaching to our children.  Solomon says in the Bible,

“The words of the wise are as goads, and as nails deeply fastened in, which by the counsel of masters are given from one shepherd. More than these, my son, require not. Of making many books there is no end: and much study is an affliction of the flesh.”

Now, I’ve been working in Christian education for over 20 years.  If you think I believe that Christians will read this, see a graphic example of the falsehood of the modern “classical education” crowd, and reconsider, you’re wrong.  I know that many Christians don’t care what’s actually true or false.  They’re going to do whatever they like–and they’re free to do so.  The problem I have is that they are not content to do what they want.  They will turn around and say that what they are doing is “classical education”–and we all know what they mean when they say that.  They mean that they are going back to the education that existed before the modern schools were developed, to the education known to Catholic saints and the wise men of the ancient world.  That’s what they are telling people and, I don’t know, maybe they have persuaded themselves that it’s true!   Worst of all, their children grow up believing that what they are studying is what the saints studied, and when they grow up and find it to be a sham, they are going to imagine that the saints wmust have been a bunch of fools to study the nonsense that their Mom and Dad had them study.  What a disaster.

What I know for certain is that none of them will offer one shred of evidence from history or the writings of any saints or wise men that what they are saying and doing is, in fact, true.  And, when they do offer proof, we better check the sources, because they’ll just make it up.

In the Classical Liberal Arts Academy, we’re not lying about what we’re teaching and studying.  We don’t make stuff up to sell books or promote ourselves as homeschool celebrities.  Everything we teach is proven by the sources we actually lead our students to study from, directly.  We don’t quote Plato and sell our own books and study materials.  We study Plato.  We teach the real classical, Catholic curriculum that was studied and taught by saints and wise men throughout history–and we can PROVE it.

If you’d like proof, ask for it.  We’ll provide it.  If you want to lie to yourself and fake it, you’ll have plenty of company–  #greatbooks #classics #classicaleducation.

Mr. William C. Michael is the founding headmaster of the Classical Liberal Arts Academy.  He graduated from Rutgers University with an honors degree in Classics & Ancient History and is a member of Phi Beta Kappa and the National Association of Scholars.  Mr. Michael has worked in private education as a Classics teacher and administrator for over 20 years.  He is a Roman Catholic homeschooling father of ten children, and keeper of a quiet family farm in North Carolina.  Mr. Michael enjoys studying ancient natural philosophy, gardening, and running.