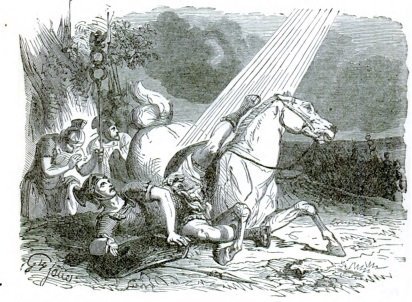 The great Apostle Paul, named Saul at his circumcision, was born at Tarsus, the capital of Cilicia, and was by privilege a Roman citizen, to which quality a great distinction and several exemptions were granted by the laws of the empire. He was early instructed in the strict observance of the Mosaic law, and lived up to it in the most scrupulous manner. In his zeal for the Jewish law, which he thought the cause of God, he became a violent persecutor of the Christians. He was one of those who combined to murder St. Stephen, and in the violent persecution of the faithful, which followed the martyrdom of the holy deacon, Saul signalized himself above others. By virtue of the power he had received from the high priest, he dragged the Christians out of their houses, loaded them with chains and thrust them into prison. In the fury of his zeal he applied for a commission to take up all Jews at Damascus who confessed Jesus Christ, and bring them bound to Jerusalem, that they might serve as examples for the others. But God was pleased to show forth in him His patience and mercy. While on his way to Damascus, he and his party were surrounded by a light from heaven, brighter than the sun, and suddenly struck to the ground. And then a voice was heard saying, “Saul, Saul, why dost thou persecute me?” And Saul answered, “Who art thou, Lord?” and the voice replied, “I am Jesus whom thou dost persecute.” This mild expostulation of our Redeemer, accompanied with a powerful interior grace, cured Saul’s pride, assuaged his rage, and wrought at once a total change in him. Wherefore, trembling and astonished, he cried out, “Lord, what wilt Thou have me to do?” Our Lord ordered him to arise and to proceed on his way to the city, where he should be informed of what was expected from him. Saul, arising from the ground, found that though his eyes were open, he saw nothing. He was led by hand into Damascus, where he was lodged in the house of a Jew named Judas. To this house came by divine appointment a holy man named Ananias, who, laying his hands on Saul, said, “Brother Saul, the Lord Jesus who appeared to thee on thy journey, hath sent me that thou mayest receive thy sight, and be filled with the Holy Ghost. “Immediately something like scales fell from Saul’s eyes, and he recovered his eyesight. Then he arose, and was baptized; he stayed some few days with the disciples at Damascus, and began immediately to preach in the synagogues that Jesus was the Son of God. Thus a blasphemer and a persecutor was made an apostle, and chosen as one of God’s principal instruments in the conversion of the world.

REFLECTION—Listen to the words of the “Imitation of Christ,” and let them sink into your heart: “He who would keep the grace of God, let him be grateful for grace when it is given, and patient when it is taken away. Let him pray that it may be given back to him, and be careful and humble, lest he lose it.”